An encounter with a selection of Australian ethnobotanical and psychedelic minds. 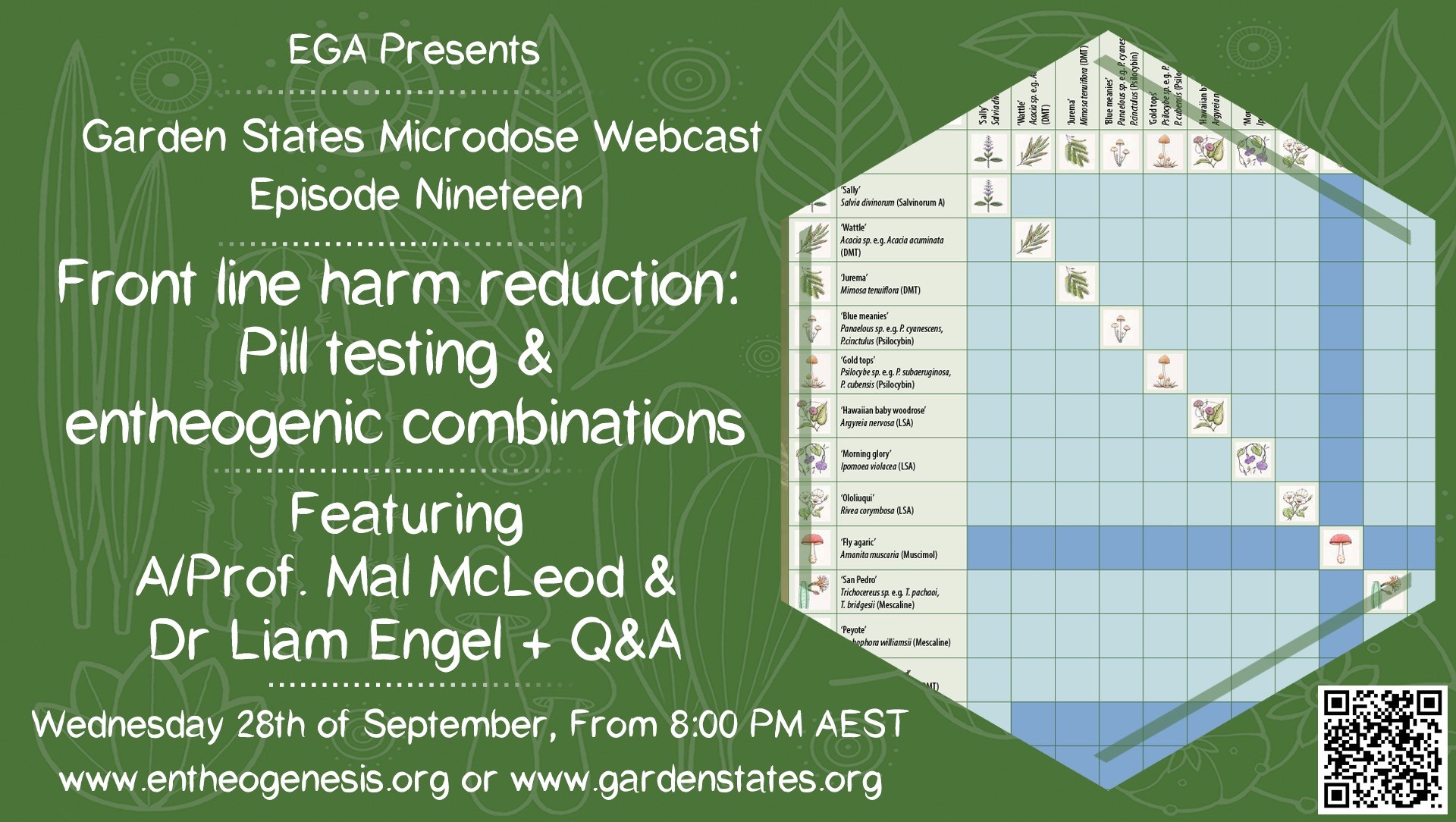 Episode synopsis
CanTEST is Australia’s first Government supported fixed site for pill testing and is now operating for free use by the public in Canberra. In this episode, Associate Professor McLeod will reveal the early results of the CanTEST testing pilot, including what drugs people are testing with the service, challenges faced and plans for the future. Professor McLeod will also review the development of pill testing in Australia and around the world.


Drug combination displays helps people who use drugs, pharmacologists and healthcare practitioners collaborate and share specialist knowledge to anticipate the risk of consuming a particular drug combination. Inspired by Tripsit’s Guide to Drug Combinations chart, EGA have recently released the Entheogen Combination Matrix, which lists common, natural sources of psychoactive substances along two axes of a graph. The intersection of substances on each axis is coded to signify the risk of consuming that plant, fungi, and/or animal combination. In this episode, Dr Liam Engel will explain how the Entheogen Combination Matrix was developed and implications for the future of harm reduction.

Associate Professor Mal McLeod works at the Australian National University. His research interests include medicinal chemistry and the development of new chemical and analytical technologies to study drug metabolism. He is the chemistry lead for Pill Testing Australia and CanTEST. Professor McLeod was awarded a Churchill Fellowship in 2020 to study drug checking services in Europe and has just returned from a six week tour of these services throughout Netherlands, Portugal and Austria. Mal uses caffeine and alcohol (but not combined!) as his drugs of choice.

Dr Liam Engel is a drug science researcher and communicator. Liam is a research fellow at Edith Cowan University's School of Medical and Health Sciences. Liam's passion is illicit drugs, particularly the areas of harm reduction, psychedelics, ecology, internet and reform. Their unique perspective draws on skills in health and medicine, communications and social sciences, as well as botany and horticulture.

We invite the Australian ethnobotanical and psychedelic community to ongoing Garden States Microdose webcast series taking generally taking place on the last Wednesday night of each month at 8:00 pm AEDT (Melbourne) until our next major conference can return. Registration for Microdose Webcasts is free, but donations are encouraged where possible to support EGA's important work (booking fees may apply).

The webcasts will cover a variety of topics from the field of Ethnobotany and Psychedelic and sustainability. The webcast will be produced and hosted by a variety of folks active in the community including but not limited to Nick Wallis (Enpsychedelia), Miss Guidance (From EGA), Jonathan Carmichael (President of EGA) and Elen Jones of The Nimbin Herbs Experience. The content will be made up of panels, guest lectures, interviews, short film segment etc. and go for around 1 to 1.5 hours.

Each webcast will stream any new videos from the Seedlings Video Project as part of the monthly show. The Seedlings Project is ongoing, so please consider making a video submission any time. You can also subscribe to our YouTube channel via the following link: Entheo TV.

We invite you to stay in touch with our community and keep up to date with our events by signing up to our email list via the EGA Home Page.